The most dynamic combination for ministry impact we have found as we go to native Asian churches is when various arms of IGo converge to work together. This was the case in India as three of IGo’s ministries joined to assist Good Life Ministries directed by Sam and Becca Gunti in the Hyderabad area. The Macedonian Teaching Ministry linked with Ransom Ministries and a couple IGo students to conduct a three-day pastor’s conference in Ieeja, India. 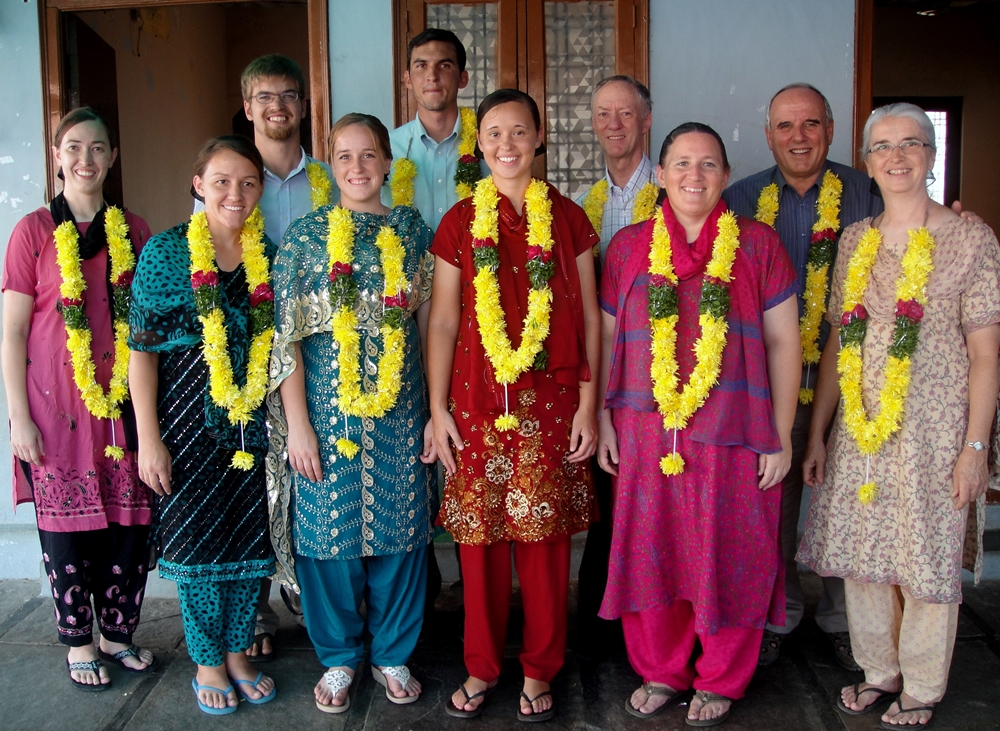 Good Life’s goal of one hundred interdenominational pastors attending the conference was met the first day as about one hundred and fifty pastors and forty wives arrived. Word spread around to the surrounding villages and the attendance rose to over two hundred on the second day. By the third day, the tents were filled to capacity with between three or four hundred people in attendance. 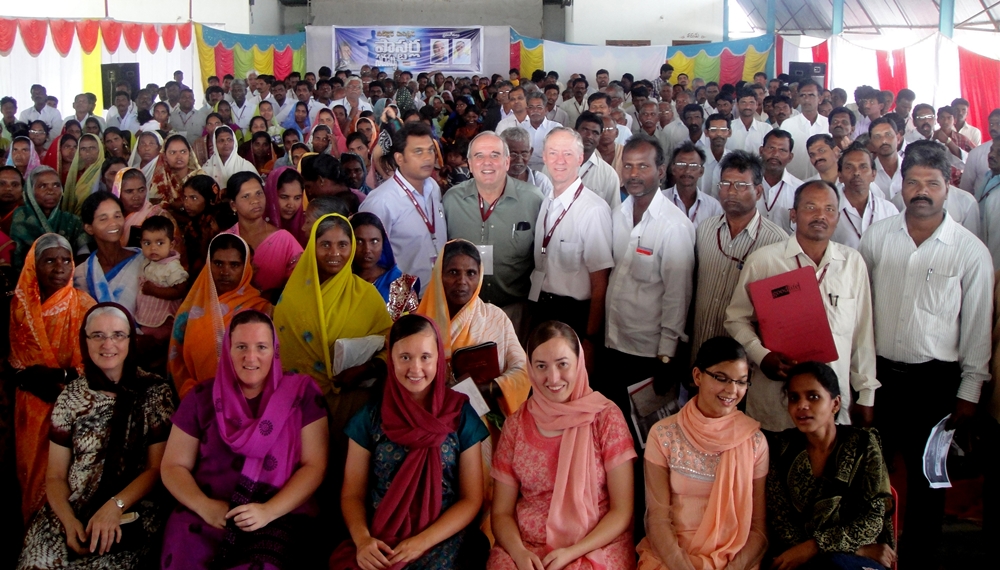 A special blessing added to this conference were two evening evangelistic meetings held in different neighboring villages. At the second meeting, there were over six hundred people sitting on the ground, cross-legged, Indian style waiting for the service to begin when we arrived. Sam opened the service with some introductions and a lesson for the bright-eyed children sitting in the first four or five rows. The message was an exposition on the wise man and foolish man.  We challenged the people to build on the solid foundation of Jesus Christ. This story which Jesus told about the rain, wind and floods had special impact due to the destructive flooding in this area about a year before. 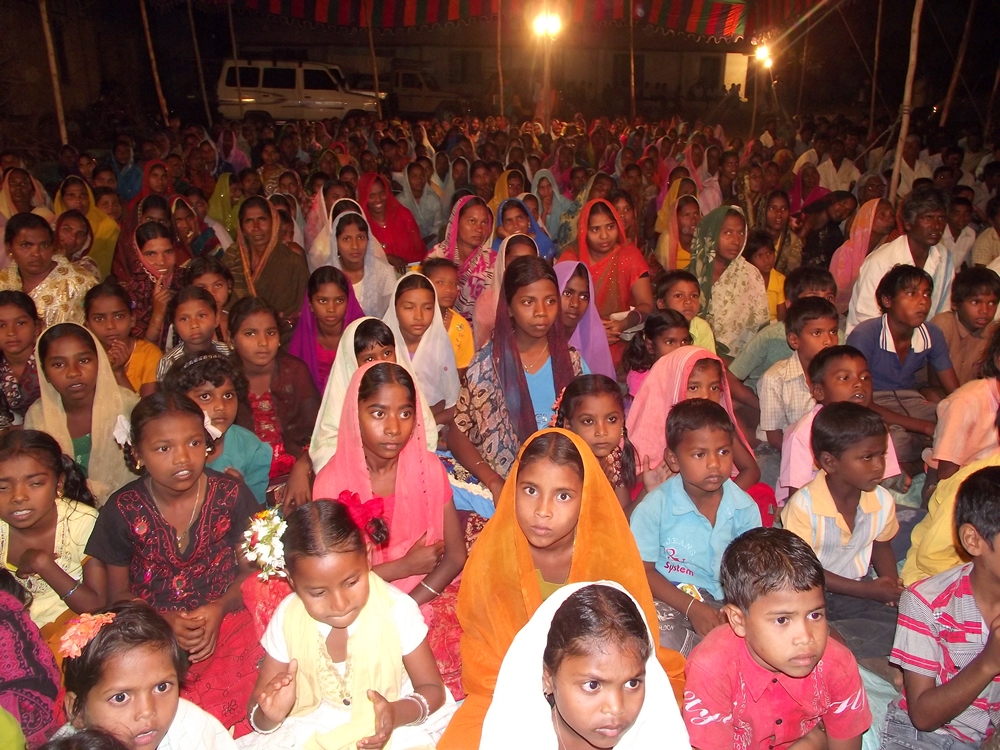 Sam then asked Brother Raymond to share a testimony on how God took him from a life built on the shifting sand of worldly interests to build on the solid bedrock of the Lord Jesus Christ.  As Raymond concluded, an invitation was given for those who wanted to receive Christ as their Lord and Savior. Being unable to understand the Telaguri language, I assumed he had asked them to stand for the final prayer.  It seemed that the whole group stood up. Looking closer, I realized that actually about two-thirds of the group had actually stood. It surprised our leader so much that he mentioned to us in English, “I don’t know why all these people are standing.” He then turned back to the group and emphasized the seriousness of choosing to follow Christ and that if they wanted to follow him in life, they should come to the front.  A mass of people moved to the front even though there was absolutely no room to provide for that many people. 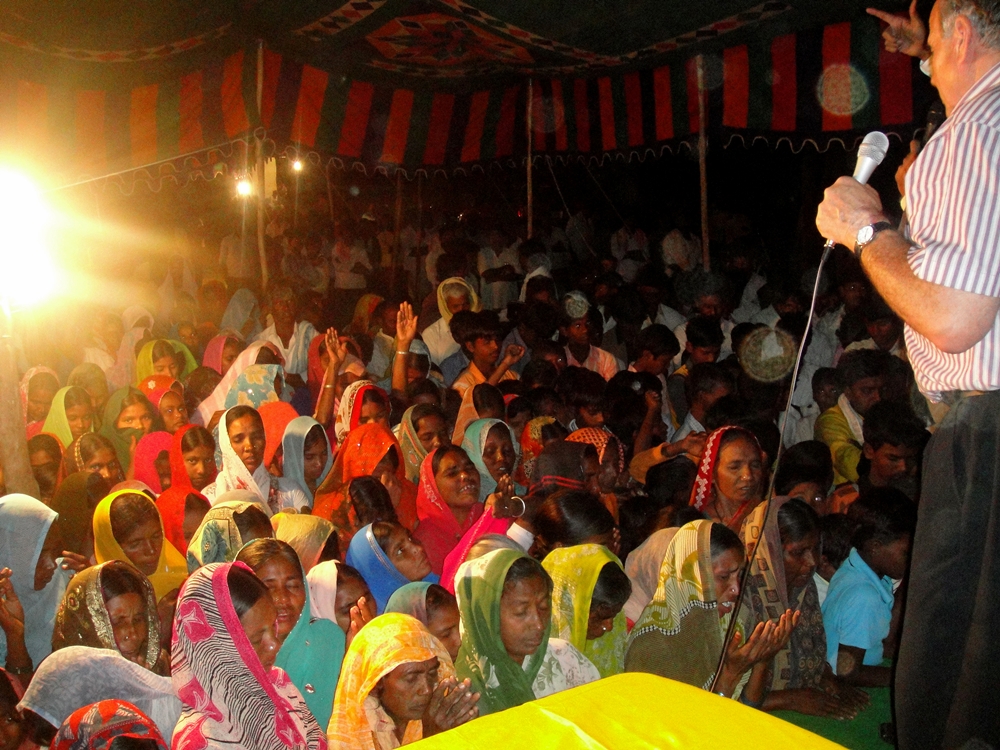 Approximately Half Of The Response

As we prayed for those who had surged to the front, numerous ones were obviously wrestling with issues deep in their souls. A group of about thirty members from the local church came up behind the group and cried out in prayer for the new believers as well. After each one had been ministered to, they returned to their seats on the ground.? It appeared that they felt such a presence of God and found it hard to leave. The leaders finally shut off most of the lights in order to close the service around 11:30 p.m.

We beg for your continued prayer support for MTM as well as Raymond and those that assist him in taking the Gospel to the surrounding countries in Asia.

Editors Note; The above article was written by brother Val Yoder. Val serves as field director of IGo here in Chiang Mai, Thailand. Thank you brother Val for your wonderful contribution to the Lords work where ever the Lord calls you to serve. Please do pray for Val as he travels back to America and gets married to Barb Lapp January 14th. Blessings to you brother and sister.