August 17-21 were the official commencing dates of the IGo Macedonian Teaching Ministry in SE Asia. Val Yoder and I traveled to the small country of Bhutan. This country is located at the foot hills of the Himalayan mountains directly north of eastern India. Bhutan is very rugged with mostly hills & mountains. The experience to fly into Bhutan was a  thrill to say the least. We flew in on an Airbus A319 jet plane literally flying down the valley making numerous turns around mountain ranges & hills to follow the valley to where the airport was located. The runway was short due to lack of  flat valley space. We stopped hard and fast. It truly was an “only in SE Asia experience. 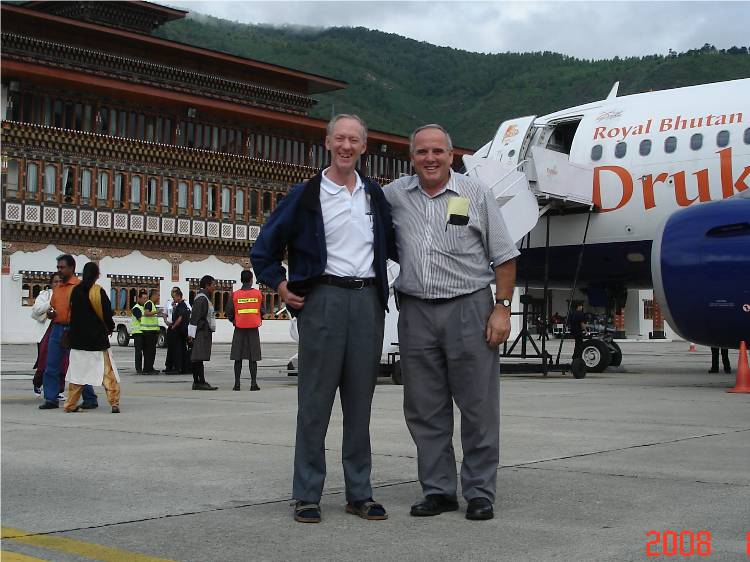 Bhutan has a population of 700,000 people and only 2.5 % are Christian. The country is primarily Buddhist and its influence is seen everywhere. There are many stuppas (a place of ancient Buddhist worship), monumental shrines, Monks, prayer flags and prayer wheels to be seen most everywhere. We were overwhelmed with sadness at how dedicated these dear Bhutanese people are at spinning those prayer wheels and walking around & around those Buddhist monuments seeking virtue & forgiveness of sin. In many ways their dedication and diligence shames Christianity.

But then there are also the dear Bhutanese Christians. They certainly gave us a royal welcome and treatment. What a privilege and opportunity is ours to get along side of theses dear native Christians, upon their request, for Biblical teaching and training. They live in a country which is shackled in the bondage of Buddhist religious deception. And God grants us the privilege & opportunity to get alongside and help them with Biblical teaching and training to win their own people to Jesus Christ. My heart thrills and staggers at the same time at such a precious opportunity and responsibility. Please do pray for these dear Christians as they seek and pray to see their country give honor & glory to Jesus Christ.