I was privileged to have the opportunity to travel with Brother Raymond Burkholder to Myanmar from October 15 to 24 in order to participate in a Macedonian Teaching Ministry Conference. It was a blessing to see the desire for teaching and the passion of the Christian leaders in Myanmar to reach their own people for Christ.

We visited two locations in Myanmar during this trip. The first was to the Waboegone Karen Tribal Village on Pyinsula Island in the Irrawaddy Delta. This village had been devastated by cyclone Nargis several years ago. Before the cyclone the village had a population of over 1,000 people. That has been reduced now to about 240 people. There are many partial family groups and orphans who are survivors of the cyclone.

Both Brother Raymond and I preached at the local church in evening services. Stephan Burkholder and Dwight Walner accompanied us on this trip. They also shared their testimony and children’s meetings. We also visited in homes in the village and shared the Gospel with people in their homes. At every home service neighbors gathered to hear the Gospel as well. 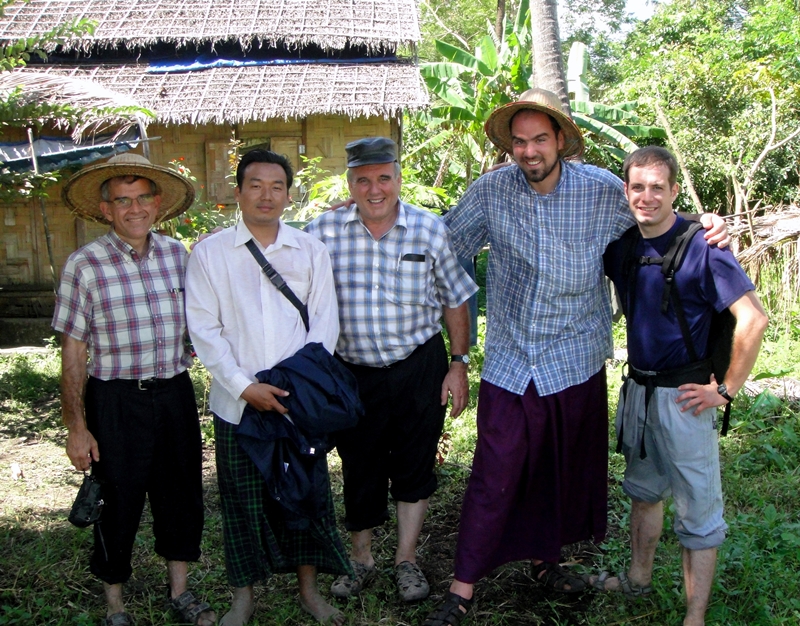 In one of these home services we met a young man by the name of Tin Htun Aung. His mother had been a Christian, but his parents had been killed in the cyclone. He was living with his Buddhist uncles. He expressed an interest in accepting Christ but was afraid of what his uncles would say. We prayed for courage for him and encouraged him. One of the local men in the village had been sharing Christ with him and he was thinking about accepting Christ. Later that evening he came to the house where we were staying. At 11:00 PM that night he gave his heart to the Lord Jesus Christ. After he prayed the sinners prayer and received Christ, he said, “Thank you for bringing the light to me in my village!”.

We also toured a shrimp farm in the village that is being operated as a self help project in the village. The people there have been shrimp farmers for many generations. After the cyclone the shrimp beds were destroyed and many of the land owners died. The church is now purchasing shrimp bed land and turning it over to young men who are professional shrimp farmers. They are using 40% of the income to repay the loans they have for the land. 40% of the income goes for wages to the farmers. 10% of the income is given to the church, and the other 10% is used for community improvement projects such as saving for the opening of a medical clinic. The village has no medical services and the people would really love to have a clinic in their village.

The people in the village were very grateful for our visit. It took major effort to make the village. It took us 22 hours to travel from Yangon to the Waboegone village. We had a 12 hour bus ride with 70 people in a bus with only 44 seats. At one point the bus was so full that the driver climbed in the driver’s side window! After four hours on the bus they said the road was “not so good”. We transferred all the people and luggage to a truck and covered the next hour of travel in the truck. Then we transferred everything again to a second bus.

After an all night bus ride we then rested for an hour before we went to the docks in Laputta. At the dock we got on a long boat and traveled another five hours by boat until we reached the village.

After several days in the village we made the trip back to Yangon and then traveled to the Northern Myanmar city of Mandalay. In Mandalay we conducted a two day conference. Brother Raymond taught missions from the book of Acts and I taught on the Fruit of the Spirit. The teaching was well received and greatly appreciated. 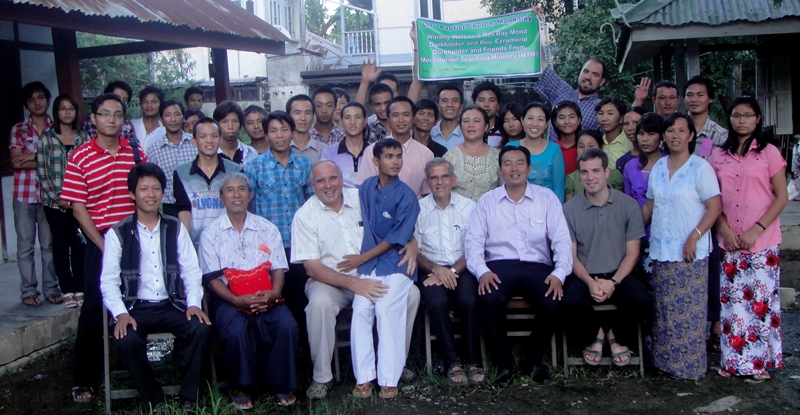 I was impressed with the indigenous mission work that is being done by our Christian brothers in Myanmar. Our conference coordinator operates a children’s home near Yangon for orphans from cyclone Nargis. This is supported totally by gifts from churches and Burmese believers.

One of the pastors who helped to host the conference in Mandalay showed us a medical clinic that their church is operating in a ghetto in Mandalay. This ghetto consists of 700 house that are built in a swamp. The clinic is staffed by three Burmese Christian doctors who volunteer their time. Their church also operates an English teaching ministry center for university students in Mandalay. Again this is all supported and staffed by Burmese believers.

I found that the churches and church leaders had a real passion for the lost. They were looking for creative ways of reaching the lost in Myanmar. At the conference there was a group of about ten young men who were studying the Korean language. When they have mastered the Korean language, they will go to work in Korea. The majority of their wages will be sent back to the church in Myanmar to support Burmese missionaries to go out to villages for the purpose of church planting. We laid hands on these brothers and prayed that God would bless them and use their efforts to raise up many new believers in Myanmar.

This trip to Myanmar was a real encouragement to me. I believe that God has gifted Brother Raymond in unique ways to enable him to carry out this ministry. He has been blessed with many relationships in many countries with men who are serving God in their own countries. Raymond has become a spiritual father to many of these men. For some of them, they do not have a Christian father and Raymond can fill and important role in their lives.

Editors Note; Merle Burkholder is from Sioux Lookout, Ontario Canada. Merle is also the IGo board chairman. A very special thank you to brother Merle for serving the Lord and the Myanmar people through MTM.

Click Here For A Picture Tour Of MTM To Myanmar