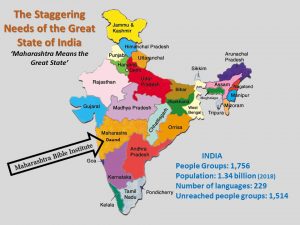 Maharashtra State alone has 11 million people in 43,665 villages and only 1%, of the total population are considered Christian (and this would include Catholic)

All India and Maharashtra desperately in need of the LIGHT of JESUS CHRIST.

All India and especially Maharashtra, SO GREAT A NEED FOR SPIRITUAL DISCIPLESHIP & TRAINING

WHAT IS OUR RESPONSIBILITY?

September 18-28, 2018 MTM in partnership with Fruitful Ministries hosted a two-week Bible Institute for pastors and emerging leaders in the state of Maharashtra, India. This state is the 3rd largest state in India, with 38 districts and each district having its own dialect. Many of these districts were represented at the Bible school. There are 38,000 unreached villages in Maharashtra state.

Fifty students were invited to the Bible school. Many more who wanted to come were turned away. Several of them traveled up to 15 hours by train to attend. One pastor went home over the weekend only to have his shoes stolen while on the train. The students were filled with the “ZEAL OF THE LORD”; their faces glowing from an inner peace. They were hungry for the Word of God. They took notes, followed along in their Bibles, and listened eagerly with rapt attention.

It was evident though that they lacked Bible knowledge.  The stories we know so well were unfamiliar to many.

At least 13 of them did not even own a Bible. The need for teaching is oh so overwhelming! Raymond taught on ‘Worldwide Evangelism’ and I taught on ‘Knowing God’.

Those attending left fully committed to going forth and planting churches for Jesus. They were aware of the spiritual needy around them. One pastor knew that within a 40-kilometer radius of his church, there were 150 unreached villages. We were challenged by the commitment of the pastors to go and win others for Jesus. Commitments were made to go plant new churches in the next few years. These dear saints have so little of this world’s goods, yet they go boldly in the Name of Jesus. Many of them have already planted new churches. 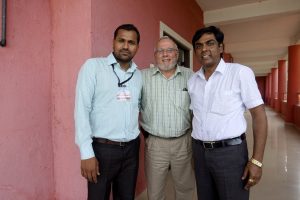 Revival sermons were preached one evening each week. The Holy Spirit moved in a mighty way. A lost Hindu soul that came with her Christian sister found the Lord and many of the students renewed their zeal to serve Him fully (click here to see the photo album) . What a time of rejoicing in the Lord! The presentation of certificates climaxed the two weeks. Praise, worship, skits and testimonies inspired everyone. A time of group games, fellowshipping and food ended the evening. With a tremendous BOLT of lightning, BOOM of thunder and a REFRESHING rain, God pronounced His blessing on the Bible school! 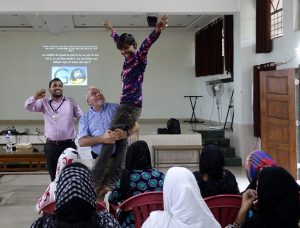 The burden of the local Bible school committee is to raise up leaders that are self-supporting. They have a deep concern for unreached souls of the Maharashtra region of India.

It was a blessing to be able to teach these hungry souls deeper things of the Word. May His Kingdom be enlarged, glorified, and lifted up because of it. We left knowing that teaching and training among the church leaders is desperately needed! Their cry to us was, “When will you come again?  WHEN?”  Pray for willing workers. The LORD OF THE HARVEST is calling. So great, so great a need!

Editor’s Note; Tim & Mary Alyce Lauver are from Mifflintown, Pa. Tim has pastored at Crossroad Mennonite church in Richfield, Pa for 30+ years. A very special thank you to Tim & Mary Alyce Lauver as well as the Cross Roads Mennonite Church for sending Pastor Tim to serve the Lord through MTM. Your sponsorship and their labor of love for the Lord & the students in attendance at MBI was greatly appreciated. May the Lord reward each of you openly.