‘So shall my word be that goeth forth out of my mouth: it shall not return unto me void, but it shall accomplish that which I please, and it shall prosper in the thing whereto I sent it.’ Isa 55:11

These are the words that kept going through my mind the past two weeks as I partnered with Bro Raymond Burkholder in teaching in two MTM Pastors Seminars, in two different cultures, in two different countries, and two very different experiences. After traveling from home here in Tanzania for a day and night by bus, I met up with Bro Raymond in Blantyre, Malawi. It was good to meet him, but felt bad for him as his checked bag was not on the plane and this bag had all his clothes in it other then what he was wearing. So, after shopping for some clothes and buying Bibles to distribute at the Malawi conference, we headed out for Nsanje where we were conducting a three day leadership seminar.

They put us up in a room in pastor Michael’s house and the seminars started the next morning. We were planning on each having 6 sessions, two each per day for three days, but, as we say here in Tanzania “TIA” (This Is Africa), and as usual here, we were not given the time for the first session till almost noon. But, after encouraging the coordinators, we were able to get ten and a short session in before we had to leave.

I have seen Bro Raymond preach a number of times, but have never seen him multi tasking with a sweat bath and preaching at the same time. But oh, did we sweat! It was extremely hot in that block church house with a tin roof and practically no ventilation. But as usual, God was good and we both acknowledged that we didn’t think of the heat as long as we were preaching. It became evident to me again that from what I have seen here in East Africa, the teaching that these pastors give is very shallow and basic. Many of these pastors didn’t even own a Bible, so how can they teach what they cannot even read. Some of them said they teach out of tracts and magazines. (We did give all the pastors, that didn’t have a Bible, a Bible before we left.)Something that they kept telling us again and again was that they had never heard teaching like this. Their attentive listening made preaching a delight as it seemed to draw it out of you.

It was one of those places where the bath house has about a five foot wall around you and there you are, bathing with your head sticking out of the roofless bathhouse while watching the women do the cooking just a little ways off. Oh, these are stretching experiences, but oh so good.

On Wednesday we finished by noon and headed for Blantyre. After having the car overheat and we thinking we may not make the bus in time, we were able to get water and get it running again so they dropped me off at the bus station to get tickets while they went to see if Raymond’s luggage may have come in, and PTL, it was in. It had come in that very day. So we left at 6:00 pm on a bus for Karonga , which was a bus with 65 seated and 25 standing passengers plus a large heap of luggage piled in the front. After traveling all night we were coming down a very steep mountain, our front wheel gave out and the bus stopped, not to move again until it is repaired. Raymond and I quickly got out and a man with a mini van stopped and took us to the bus station where we were able to get a taxi for the border. We walked across the border where John (Melvin’s son) was waiting with their Land Rover. It had been twenty two hrs on this bus and we were two very weary travelers. After a 2 hr drive in our Land Rover, we spent the night at our house in Mbeya.

Early in the morning we left by bus for Dar Es Salaam and arrived at 7:00 pm, another 13 hour bus ride. We stayed in a guest room and flew by way of Nairobi and on to Kisumu, Kenya the next day. There we were met by Tommy Wagler who is part of the Beachy mission personnel there at Kisumu. After a good supper with the Beachy Mission folks, and a good night of rest, we worshiped with them in two different churches on Sunday morning. We then headed out for Ogembo (about 3 hrs by taxi) in the afternoon to start our seminar on Monday. 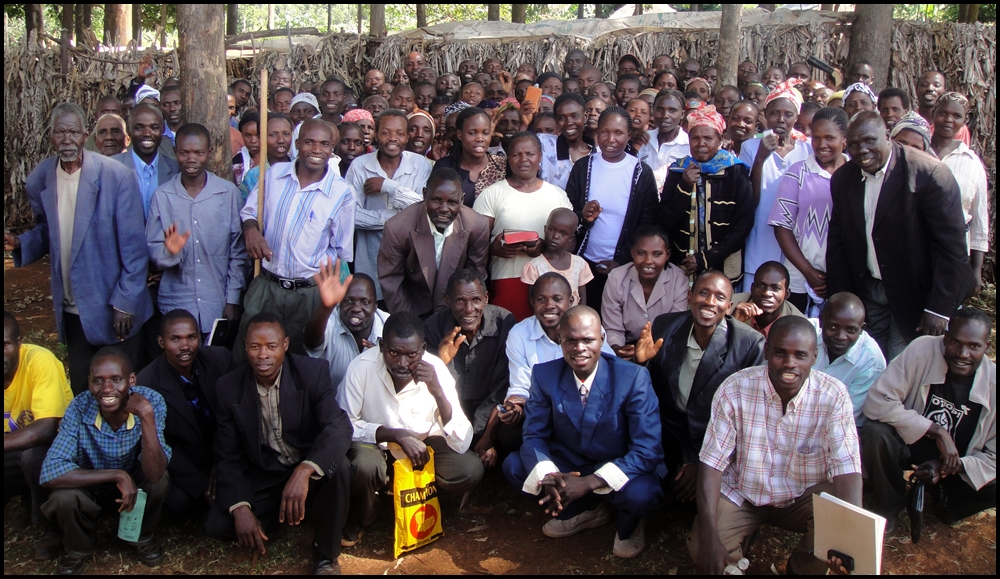 We were very blessed with the hunger of these pastors for the Word. They seemed to drink in the teaching and were very thankful for all they could get. What a joy it was to teach on the Kingdom of God and see them very eagerly receiving it! I think I will always remember the one older pastor that sat there very much into the teaching, and of all the pastors that were there I expected him to be the one that would have the “pastor air” about him as so many do here in Africa. But after one of the sessions, he got up and in a very broken voice, almost in tears, which is something you just do not see here, he confessed that he has been a Christian for 40 years and has never heard anything like this. Oh, may we continue giving the Gospel of the Kingdom wherever the doors open. I was greatly blessed and have been very glad for the opportunity to serve the Lord in this way.

Editors Note; This article was written by Brother Melvin Kauffman who served as a guest teacher with MTM in Malawi as well as Kenya. He lives with his wife Anna in Mbeya, Tanzania as well as his family. They have been serving there for about one and a half years now. Melvin was a tremendous blessing to me as well as those he taught. He well knows the African culture and thus really connected with the people. Thank you brother Melvin for serving the Lord in this way.