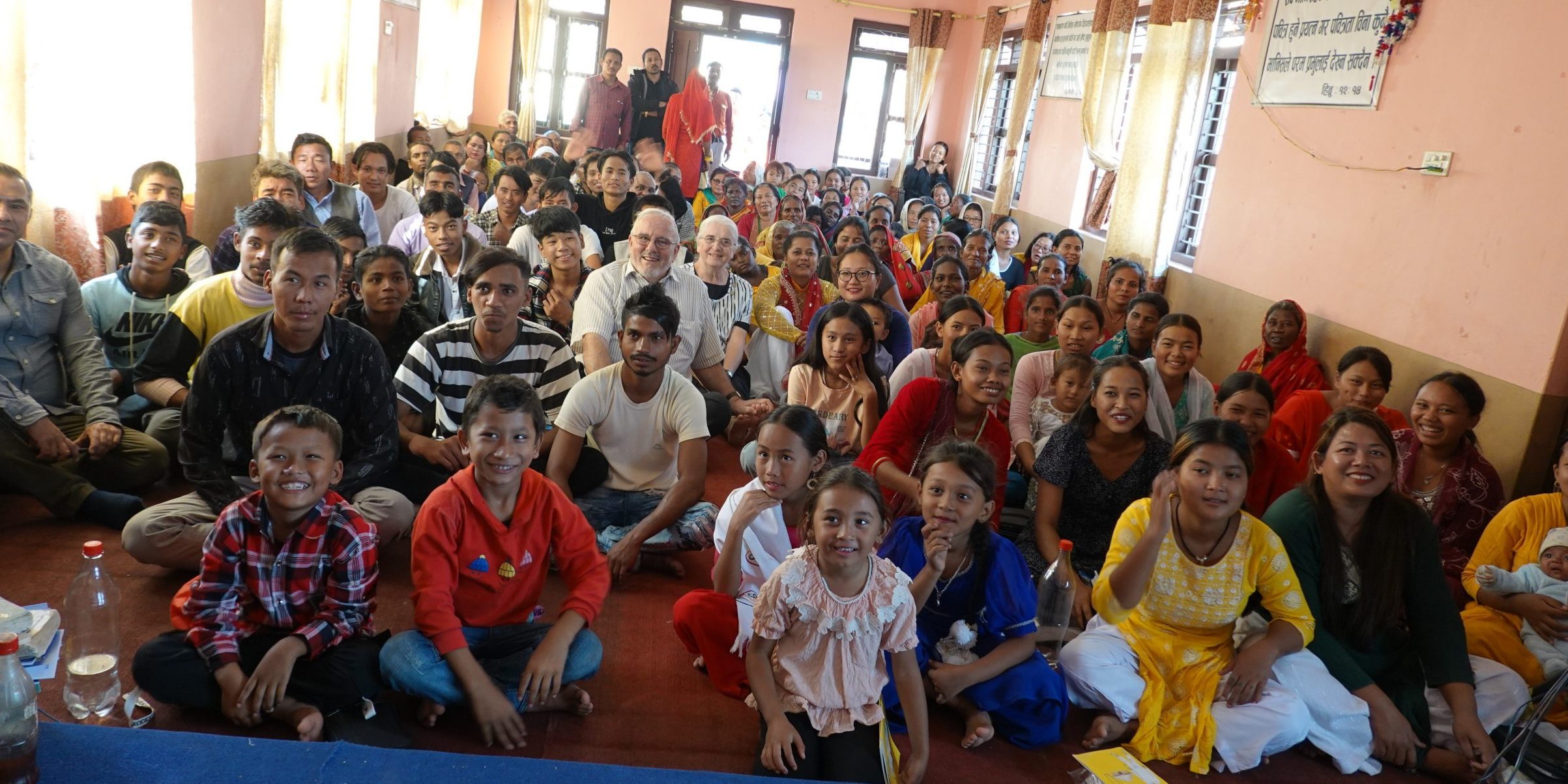 Dear MTM prayer partners, We greet you in the name of our Lord Jesus Christ.

I am Pastor Anand Sinha and I am ministering among the Muslims in Nepal. There are about 7% Muslims in Nepal and we are focusing on reaching out to the children of Ishmael (Muslims) who are lost without our Savior Jesus Christ. November 13-15, 2022, we were in Ratanpur village for a MTM conference and we had guest teacher Pastor Raymond Burkholder from the USA. We have known Pastor Raymond since 2010 and our dear God gave us the wonderful privilege to work together to build the kingdom of God in Nepal through teaching conferences and 3 weeks Bible School. It is a blessing to team up with him after a long interval.

The road towards the Ratanpur village was badly damaged due to monsoon rain and flooding. The road was dusty with lots of potholes. Some part of the road was under maintenance and we had to drive through a diversion.

In one place the diversion road was so narrow that it seemed impossible to pass through it. If we make a slight mistake, our vehicle would fall 300 meters down the hill. Seeing the risk, we wanted to return back. But there was no space to turn back the vehicle. We were stuck in the middle of our journey. After much consideration and praying to God, we made the decision to cross this dangerous narrow road to reach the destination. With the help of God, we were able to cross this dangerous narrow road. The road towards Ratanpur village was bumpy as there were lots of pot-holes. We were a little worried that Pastor Raymond and his wife Naomi might complain about the rough ride. But we were very surprised that they enjoyed the journey and didn’t complain about anything.

On 13th to 15th of November, the cry of Ishmael conference was held in Ratanpur village. There were many pastors, leaders, evangelists and youths attendees from different village areas. Some of them are living among the Muslim communities of terai regions. There were some seekers of the truth as well who had come to attend the meeting with their Christian friends. Our guest speaker Ps. Raymond Burkholder, taught the attendees from the story of Abraham and his son Ishamael from the book of Genesis. When Hagar and her son Ishmael were cast out and were in the desert, they didn’t have food and water to survive. They were about to die from hunger and thirst.

When the little boy Ishameal who was going to die cried unto the Lord, he heard his cry and saved him and his mother by providing them water. In the same way, the children of Ishmael (Muslims) are dying without the living water and living bread, Lord Jesus Christ (Jn. 6:35). Ps. Raymond said : Until this day, the children of Ishmael (Muslims) who are starving spiritually cry out five times a day from the mosques. Our loving God has heard their cry and has compassion towards them. He wants them to be saved through his son Jesus Christ. Ps. Raymond encouraged the attendees to reach out to their Muslim neighbors and witness them the living water and bread of life, our savior Jesus Christ. The attendees were much encouraged by this teaching conference and when he asked if they are willing to witness Christ to their Muslim community, many of them raised hands and came forward. He prayed for them that God will use them to be an effective instrument as they reach out to their Muslim neighbors and friends.

Some of the attendees had brought their non-chirstian friends to this conference so that they would be able to know the truth and accept Christ in their hearts. These non-Christian attendees were very much blessed through this conference as they were able to know the truth. During the conference, when Pator Raymond asked if there is anyone who is not saved and wants to accept Christ in their lives, four souls lifted up their hands and came forward. Two of them were children of Ishmael (Muslims) and other two hindus. He prayed for them for God’s blessing for their life in Lord Jesus Christ. He also prayed for their safety and protection from all evil.

This Christian youth Rabindra started to share the gospel of Christ to his friend. At first Prakash Raj was very surprised to see his friend becoming Christian and he was very annoyed with him for leaving the Hindu religion and the extremist group. He tried to distance himself from Rabindra but Rabindra continually prayed for his friend and approached him to share the gospel. A few weeks ago, Rabindra went to Prakash Raj’s room & gave him Christian literature so that he could find the truth of the gospel. Prakahs Raj was very angry to see his Christian friend in his house. Prakash Raj threw the literature on the ground and asked Rabindra to leave his house immediately. Later on he took the literature and started reading it to find the fault in it. As he read it, he found nothing wrong in it. Instead he found the literature interesting which teaches about one true God who loves the world and sent his son Jesus not to condemn the world but for the salvation of mankind from their sins.

Then, he started to show interest in knowing the gospel of Christ. His friend Rabindra brought him to this conference. After knowing the truth, he opened his heart for Christ. We prayed for him and for his new life in Christ. We all rejoiced and thanked God for saving the life of this Hindu extremist youth and also other three souls who attended the blessed conference and accepted Christ in their lives.

The attendees were very blessed by the teaching conference and they made commitments to share the gospel to the children of Ishmael (Muslims). At the end of the conference, we provided them literature so that it will help them to share the gospel to lost souls. Finally, we want to thank God for this blessed MTM conference in Ratanpur village. We hope that we will be able to join hands in the future MTM’s teaching conference in different parts of Nepal to encourage Nepali churches in reaching out to the children of Ishmael (Muslims) in Nepal.

God bless you all !