NOW Is the Acceptable TIME

Recently a Christian leader in India was involved in a court case concerning his baptizing a new believer.  One was a young girl who went on to marry a Hindu man.  They discovered she was a Christian and she was killed by her husband’s family. Going through her phone they found pictures of her baptism and were able to trace the leader who had baptized her. He faced legal charges in a costly lawsuit, costly in time and money. Another leader in India is also facing a court case involving a tract written using the ministry name. Because the writer used the story of the prodigal son and talked about the fatted calf, the Hindus have taken the ministry to law.

India has the second largest population in the world with 1.3 billion souls (first is China @ 1.4 billion). There are about 3400 unreached people groups in the world of which 2311 are in India.  This past week India has re-elected their present prime minister. This man has a vision of making India a pure Hindu nation. In the past five years, Christians have experienced an increase of persecution, harassment and increased scrutiny of any Christian activity. NOW IS THE GOSPEL DISCIPLESHIP OPPORTUNITY FOR INDIA. THE OPEN DOOR IS FAST CLOSING!!!

Behold, I say unto you, Lift up your eyes, and look on the fields; for they are white already to harvest. John 4:35. 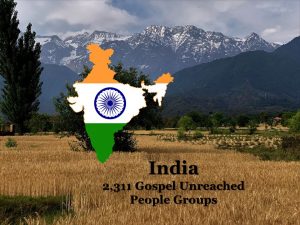 The harvest truly is great, but the labourers are few: pray ye therefore the Lord of the harvest, that he would send forth labourers into his harvest. Luke 10:2

MTM Mission Statement; Mobilizing Native Christians to Win their Own Unreached for Christ … It is the vision of MTM to provide a reproducible, and sustainable model to train and send out native men of leadership who will evangelize, make disciples, and plant churches among their own native unreached people groups.

India Is A Dominant Gospel Discipleship Focus For MTM 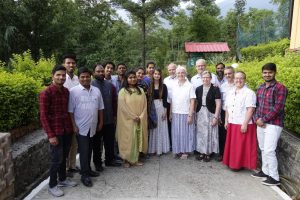 Click on the photo to view entire photo album!

The MTM team along with all of the delegates!!

May 6-24, 2019 Macedonian Teaching Ministries conducted a three-week Bible school in Palampur, Himachal Pradesh, India, at the Himachal Bible College and Seminary. Yearly the college is on semester break over this time and offers their facilities to MTM for an extension teaching program of the college. This is now the second three-week Bible school that MTM-HBCS have partnered together (the former one was in 2017). Three teachers each taught one session each day. Raymond Burkholder taught on The Kingdom of God, theology and principles, showing the heart of God in establishing His Kingdom here on earth, the necessity of the new birth, following the life and commands of Christ, and going forth in the power of the Holy Spirit to reach the unreached. Milton Loewen from Lacrete, Alberta, Canada, taught Basic Bible studies, teaching on many different subjects related to the Christian life, how to study the Bible, Who God is, assurance of salvation, and the second coming of Jesus.  William Slabaugh taught on the eternal purpose of God, showing God’s heart for the world, how the gospel was carried out to its fulfillment in Jesus Christ and continues through the ministry of the church by the Spirit of God. God’s purpose will be fulfilled despite Satan’s many attempts to stop God. 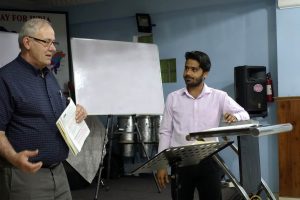 The heart of God is that everyone would come to the knowledge of the truth.  As we continued to teach in those three weeks, the focus was on seeing God’s heart for the world and His plan of redemption, recognizing the necessity of being surrendered to God so that He can use us to build His kingdom. We are not without the resources to do His work, but He needs vessels, vessels that are saved, sanctified and committed to His cause.  Our commitment to Christ must be greater than our own lives.

The students came from Himachal Pradesh & Punjabi states of India and from Eastern Nepal. Three Nepali pastors traveled for three days to come to the program. It was very precious to see their desire for the Word of God and their sincerity in taking the Gospel to their own people. The need to work with pastors is great. Through the native pastors the work can move forward effectively, despite restrictions and persecution. 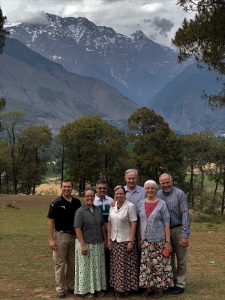 However, the great need in India is a continued teaching and discipling of believers and pastors.  One comment we heard a few times from our students was that they were challenged by not only what was taught but how to live out these kingdom principles in their lives.  Jesus ended the Sermon on the Mount with a strong warning that it is not enough to know the truth; the truth must be put to practice in our lives. Just before He ascended into heaven, Jesus placed the mandate of the eternal purpose of God upon His disciples and for all believers. This mandate is still in effect today! God the Father planned the plan; God the Son has worked out that plan and God the Holy Spirit is applying the plan. God has chosen His people to live out His plan on this earth and to propagate the plan to all nations!

Editor’s Note; The above article was written by William & Sharon Slabaugh. William & Sharon Slabaugh are from New Holland, Pa. William served as pastor of the Church of Cross Keys, in Intercourse PA. They are currently serving under I58 on the island of Chios, Greece, ministering to Middle Eastern and African refugees. Thank you Willie & Sharon and your son Josh (who serves w/MTM as IT assistant) for faithfully serving the Lord with MTM. Your labor of love was greatly appreciated.

Beholding the Harvest…In the Context of The Gospel Unreached
December 14, 2019

Before, We Only heard…Today We Understand!
December 3, 2019